Overall: The Plantronics SAVI W430 delivers flexibility, simplicity of use and high definition audio quality. Although the SAVI is a bit expensive,  it delivers everything you need from a wireless headset making it an ideal choice for the heavy softphone user or road warrior that demands a high performance headset.

Cons: The biggest downside to the Plantronics SAVI W430 is the price. With a street price around $170 USD, the SAVI is as expensive as a desktop IP phone. Also the SAVI W430 did become mildly uncomfortable after periods of use exceeding two and half hours, but then again so does talking.

Overview: The Plantronics SAVI W430 is a DECT wireless headset system designed for use with softphones and unified messengers. The SAVI W430 utilizes a USB dongle to connect to a PC or laptop.

For some, fring coming to the iPhone was old news – there has been a version of fring for jailbroke iPhone since the spring. But for many, like me, the announcement of another Mobile VoIP application – from one of the leading Mobile VoIP providers presented another opportunity to test out the Mobile VoIP capabilities of the iPhone. I have been using the fring iPhone application for the last few days on my first generation iPhone to utilize and manage various communications methods on my iPhone. What follows is my insights and impressions on the fring iPhone application.

When I first got my first generation iPhone I was foaming at the mouth – I couldn’t wait to experience Mobile VoIP on it. Unfortunately for me, I would have to wait almost a year – until Apple launched it’s iPhone App store. The first official VoIP application to hit the store was from Truphone – the UK based Mobile VoIP provider who I had been watching blaze a trail in the industry since their inception.

I have been using the Truphone iPhone application for a handful of weeks. What follows is a review of Truphone for the iPhone – enjoy.

One of the phone systems that I have been playing with over the last few months is Windows based 3CX phone system from the UK based company of the same name.

I have known about the 3CX system for quite sometime, having first come across the company while doing some searches on YouTube. Now, I come across a ton of products every week. My office and home are litter with them. However, most do not hold my attention for more than a few days, like the 3CX system has.

It is windows based and very easy to use.

Before I get into the nitty gritty of the review, let me preface this by saying that will I can be dangerous with code if given the chance, I am not a programmer and very much do not want to be one, so I am biased towards systems that are built for the average technologist (or employee).

3CX Phone System for Windows is a software-based IP PBX based on Windows. From the get-go this is one of the most important differentiators of the product as it “feels” like any other windows product that millions of business users are use to. In addition, because the phone system is software, it can run on an existing PC (if you are a small company) or you can run it on a dedicated Windows server. What made the install so easy was that it was Windows based (so I could download it right to my PC) and with their intuitive web based interface setting up extensions, provisioning phones, creating an auto-attendant was painless. Although I did not set-up a POTS line or integrate the system with Outlook, I did spend some time “playing around” with those configuration settings and they were straight forward as well.

For many, simple isn’t sexy, but when you don’t care to spend days (or weeks) configuring a phone system it sure is!

The 3CX systems greatest Pro is also one of it’s downfalls (depending on who you are). Since it is built to be simply and easy, it does not have a ton of bells and whistles. Certain must haves such as find-me-follow-me and call queues (available with paid version only) are not currently available.

Although I did not integrate the system with an analog gateway for PSTN connectivity, I can tell you (based on previous experience) that configuring an analog gateway isn’t always easy. This has the potential to be a pain point for those who are less than savvy (Unless you are using a Patton gateway, in which 3CX automatically creates configuration files
which can be uploaded to the gateways. This makes configuration of gateways with 3Cx a snap). In addition, because it is Windows based, there are not any PCI cards that I know of that can be used as an alternative to an external gateway.

Honestly, it was tough to find much wrong with the software. It is easy and simple to set-up and maintain, it has a pretty robust feature set, supports a wide variety of hardware and is very affordable. Software aside, 3CX provides excellent support and the organization is very visible and accessible. Furthermore, their forum provides a wealth of knowledge.Now, if you are an enterprise looking for a phone system, this isn’t for you, but if you are an SMB without an IT staff (or one that is not VoIP/Linux savvy) this is an excellent solution for you. 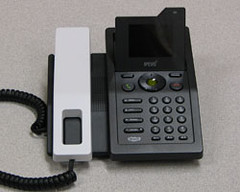 Howard Chang has a Skype Labs Review of the soon-to-be released IPEVO SOLO phone for use with Skype. I have always been a big fan of IPEVO products as they combine robust features and functionality with amazing design. Their latest release is no exception. Check out the full review of the IP EVO Solo here.